Generator load bank testing is an essential part of a good maintenance program. Part of any generator maintenance plan should include annual load bank testing. A load bank test should done at a minimum of once a year. Yearly testing will help to extend the engine life and help ensure reliable peak operation when the generator is called upon to keep your business up and running during an emergency.

What is load bank testing?
Load bank testing allows a generator to be worked or exercised to verify it’s ability to run at its full rated KW output. When a generator is just being exercised on a weekly basis, the generator is running at far less than its rated out capability. When a load bank is used, the artificial load brings the engine up to normal working temperatures and conditions.

Load bank testing does not affect your business during the test. Normal electrical power is never shut off to your business in order to do the tests.

Most generators are not run like the engine was designed to run. Most sit in a standby application, and running this way they can “wet stack”. Wet Stacking is a condition where unburned fuel accumulates in the engine exhaust. This is caused because running the engine with no or little load does not allow the engine to get up to normal operating temperatures and conditions. Over time the unburned fuel can become harmful to the engine. 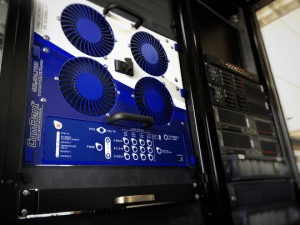 Load banking testing will cause the engine to reach operating temperatures and pressures. This will allow the unburnt fuel to be burnt out. Load bank testing will allow you to be confident that your generator can and will operate up to it’s potential when needed.

Load bank testing can be offered as a separate service or incorporated into a scheduled preventive maintenance program. Contact Austin Power Generation at 512-610-2044 and talk to our technicians about setting up a maintenance program for your standby power system.